These are held on the second Tuesday of the month at the Robin Hood, Cragg Vale starting at 19.30hrs.

If you prefer the outdoors – we have a station gardening session for one hour on the second Friday of the month starting at 13.30hrs – all welcome.

Minutes of our Monthly Meetings are below ->

You are cordially invited to join us and contribute your ideas on how we, as a community, can improve the village railway station.

Meetings are on the second Tuesday of the month (except August) at the Good Shepherd Centre starting at 19.30hrs.

Station gardeners are used to the Mytholmroyd Monsoon descending as soon as they get ready to spruce-up the station. 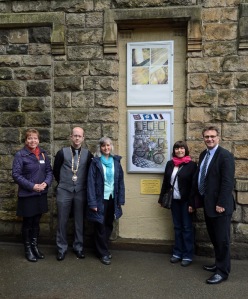 At our annual unveiling Luncheon when we entertained over 50 guests, it became even more exciting!

Just before we went outside for photographs with out talented local artists, the new Mayor of Hebden Royd Cllr Karl Boggis gave a very thoughtful speech on the value of communities like ours.

Then as our MP Craig Whittaker made an appreciative few words, the event organisers were watching the May blizzard raging outside the windows. The young artists from Cragg Vale school were outside with signs of hyperthermia.

Sue and Geoff Mitchell were quietly saying to themselves – Don’t Panic – DON’T PANIC !!!!

Everything went well in the end – thanks to all our supporters.

All the above photos are copyright Paul Bigland

Greetings from the centre of the universe and elsewhere …………. 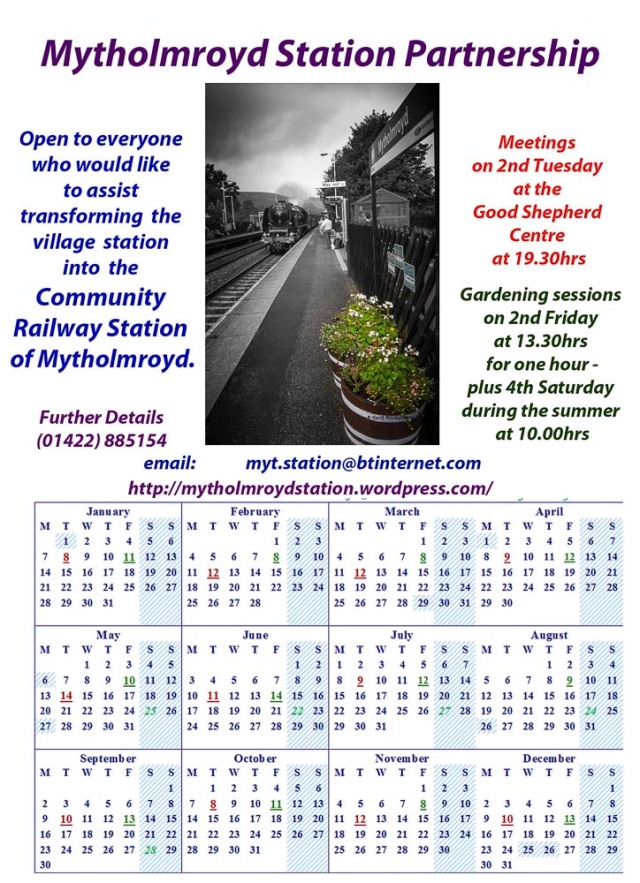 Friday 20 July – it stayed (more or less) rain-free for an hour.

Christine Stewart and Steve Bumley were shown around the station and surrounding area by the volunteers who have done so much to improve the area.

We shall have to wait and see  what they rank us in the order of things within the Yorkshire in Bloom award system.

Friday 6 July – with the river fast approaching 3 m above normal it was prudent to postpone the weeding session.

Thanks to Alex who made a spirited effort and sorry his RSPCA shop is flood-shut.

Hey lads and lasses – we beat the weather gremlin – a full two hours without a drop of rain.

Must be a record for our gardening teams – and what splendid bunch of people came along to get the station looking that much better after the awful weather we have had this year.

Yorkshire in Bloom judging is on July 20.

Those that can are busy clearing the mess from the flood, so our visitors will have something to see.

What they will see is a neighbourhood that has helped each other whenever possible.

Yet another busy month ahead.

the suspect responsible for the HOAX tag last year.

Please let us know if you see any graffiti or anything else within the public areas that could offend or put at risk stations users.

Please remember, it is all about how we can help them – to help us.

For emergencies – please continue to ring 999

Please do not hesitate to phone if you see or experience any problems at Mytholmroyd station or on the Caldervale line.

If we do not help in this way, the authorities will not be aware of any problems that are upsetting the lcoal community.

We have had a super response from the Police forces and the railway management. It is up to us to continue to help them to keep the station and the railway as safe as possible.

Interesting to note their ages – not teenagers.

Was held on Tuesday 8th December.

A thanks to our Sponsors